Most folks don’t use a golf trip planner, and we are on a mission to change all that and make the world’s golfers happier, better players in the process. Tour Pros typically plan their golf travel by selecting from a menu of tour events and arranging lodging and transportation logistics. However, that is just part of a complete travel planning equation. With Golfstrology, Tour Players and everyone else can anticipate how they are likely to feel and perform during an event window at a specific golf destination.

Make no mistake, there are no silver bullets in golf. Mr. Hogan described it best when he said the answers are in the dirt. His words are more true than ever today with equipment compensations and instruction technologies pushing toward parity in professional golf. Now more than ever, doing as Mr. Hogan did to outwork others in practice is a primary factor in achieving competitive advantage.

“There are no secrets to golf,” Moe Norman said, “only hard work … and getting your mind right.”

Getting Your Mind Right

Fundamental to getting your mind right is being confident that you have worked hard dotting all the i’s and crossing all the t’s. If you do everything right, you have a chance. Neglect one thing and all those who didn’t will gain a competitive edge on you.

Learning to include Location Astrology in competitive and casual golf travel is part of the work ethic and preparation that breed confidence and help get your mind right.

Any golfer that has traveled knows there are places you love to revisit and places you hope you never see again. There is no argument that you enjoy some places more than others. The odd thing, though, is that some of those places you revisit let you down during subsequent visits. What you may never find out on your own is, those never-again places might pleasantly surprise you on a subsequent visit. But, why take the chance, right?

Why take the chance?

We couldn’t agree more. Taking chances with lateral hazards and Oscar Brown is one thing, but with destinations? Significant expense is at stake, not to mention the non-expendable commodity…time. Who wants to risk time and money only to be disappointed?

Wouldn’t it be nice if there were a way to anticipate in advance what your golf trip to a tour stop or golf holiday at a golf destination held in store for you? How practical would that be?

Golfstrology uses Location Astrology to give pragmatic golfers the opportunity to anticipate how they are likely to feel and perform at a specific location and time.

Why would any golfer pass on choice in favor of chance? Having a clue as to what to expect is fundamental management and golf is nothing if not management. Neglecting to perform personal due diligence on an event window and location is relying on chance. Learning what to expect is choosing risk management over chance, which can be a competitive advantage.

Tour Pros and competitive golfers are invited to learn more on the Pros page. 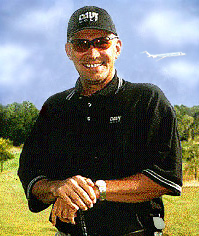 Davy Hoffman, Chief Golf Officer, has more than 30 years of experience in the golf industry, has consulted in the travel industry, and is the author of “America’s Greatest Golf Courses.”

Astrology isn’t something
to believe in..

Centuries of observation and documentation substantiate what even the most skeptical of individuals originally doubted.

Our Chief Golf Officer, Davy Hoffman, is as stubborn a doubting Thomas as ever walked the fairways of Rancho Park in Los Angeles.

He was on a mission to prove astrology irrelevant when in 1985 he first met our Chief Astrology Officer, Barry D. Cowger.

In a turn of events, Hoffman awoke to the indisputable influence the Sun and Moon exert to render Earth habitable and Hoffman became Cowger’s client, a relationship that has endured since 1985.

Earth’s axis of rotation is stabilized by the Moon’s gravitational influence. Without the Moon, Earth’s tidal dynamics would devolve inconsistently to a state similar to Mars, without a moon like ours, where axial wobble has caused polar ice to migrate to its equator and back. Imagine having to take a down jacket, mittens, and boots to Rio or Bali.

How the Moon affects life as you know it...

Lunar gravitational influence stabilizing Earth’s axis of rotation is responsible for far more moderate climate extremes than would exist without the Moon. It has allowed complex multi-cellular organisms to emerge and has created coastal shorelines nurtured by tides biologically conducive to the evolution of living organisms.

Mammalian ability to see at night evolved because of the Moon’s light and changed evolution completely, as night vision allowed mammals to walk the fine line between being able to see to hunt, and to not be seen in order to evade.

The Moon is the basis for most calendars and it is a known fact that police, fire, and hospital administrators staff up on full moon dates due to the historical increases in incidents that predictably occur.

Here's how the Sun keeps you alive...

The above seem trivial when you learn that without the Sun, temperatures on Earth would plummet in darkness within days to one hundred or more degrees below zero, to where the only hospitable places on the planet might be Iceland, where they have geothermal heat, or in a submarine in the depths of an ocean. How long would that last?

The balance and interdependence of the planets and Solar System would no longer exist and Earth, along with other planets, would sail off into space in a straight line with no Sun to orbit.

How much convincing do some people need in order to accept the patently obvious fact that life on Earth is inseparably dependent on stellar bodies for the existence of humanity and life as we know it?

..It’s something to
know about.

Sun Sign – Imprecise static data that allows you to make generalizations about yourself and where you live. As an analogy, your Sun Sign is equivalent to saying Florida is warm.

Birth Data – Precise static data that includes your exact birth time and birthplace and allows your natal chart to be cast. This is like saying Florida can be hot and cold as well as warm, is usually humid, and is subject to hurricanes.

Location Astrology – Highly specific dynamic data combined of birth data and longitude and latitude coordinates that allow an astro-map to be drawn. The equivalent here is like saying conditions are conducive to a tropical storm formation east of Homestead, while Clearwater can expect sunny skies and swells of one to two feet, Naples is looking at high temps in the mid-eighties and Milton may dip into the low thirties.

Lunars & Transits – Ultra-specific dynamic data integrating Location Astrology data with transiting lunar and planetary influences for reading precise timing that is analogous to saying a tropical storm will reach landfall at 1:02 a.m. causing high surf advisories until 7:30 a.m. with wind speeds up to 65 miles per hour as barometric pressure recedes and the eye of the storm passes directly over Kendall. Naples to St. Pete will receive up to an inch of rain overnight with lows around 71 degrees, and potential flooding is likely on the Tamiami Trail until noon tomorrow.

It’s not where or when, it’s where and when. While locations tend to fall under varying degrees of being generally favorable or unfavorable for your birth data and current objectives, timing can change all that. The same location at a different time can very easily bring about an adjustment in reality as you know it.

Without getting overly scientific, all planets are more or less on the same orbital plane around the Sun. That plane is called the ecliptic.

In actuality, some of the planets are not precisely on the ecliptic all of the time and can vary.

Pluto, for example, is 17 degrees angular to the ecliptic and projects itself differently onto Earth when near the signs Capricorn and Cancer. This phenomenon holds true for other planets as well.

At the time, date, and place of your birth, the planetary positions delineate implied lines of demarcation onto Earth's surface. These lines are no more visible than gravity, heat, cold, electricity, wind, hunger, sadness, taste, fear, barometric pressure, elation, and joy, ad infinitum.

The implied lines require advanced mathematics skills and experience to calculate and plot their paths circumnavigating Earth, complicated in part by Earth not being a perfectly round sphere. The axis of rotation causes a bit of a bulge at the equator and compounds the linear curvature of the lines.

As illogical as it sounds the first time you hear it without having experienced it, positioning yourself on or near these lines can bring about short term and long term experiences in your life. This is a gross oversimplification due to the complexity of a multitude of contributing factors, but the bottom line is that your performance and state mind on these lines during given windows of time can be calculated and anticipated.

The orb of influence along these planet lines extends more or less equidistant on either side of a planet line, with the effects concentrated most strongly at or near the lines and diminishing gradually as the distance from the line increases.

"Honey, what are you laughing at, what is so funny?"

"Oh, there's somebody on here who actually believes planets and stars can have an effect here on Earth."